PrevPreviousCould a Mediterranean diet help your heart and gut?
NextMind your gut for a beautiful mindNext 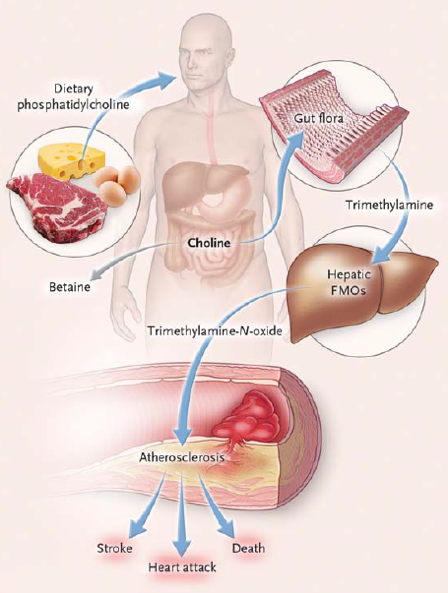 Every year nearly 735,000 Americans have a heart attack. Of these, 525,000 are a first heart attack and 210,000 happen in people who have already had a heart attack. While these numbers are staggering, the first step towards fighting cardiovascular problems and lowering cholesterol levels starts with a living a healthy lifestyle that includes a balanced diet, daily exercise along with adding a probiotic supplement.

Further research and studies conducted on probiotics show that gut health can be related to the heart. A healthy gut with a rich flora of life-supporting bacteria can mean the prevention of many health issues, even preventing and treating heart ailments.

A new Cleveland Clinic study links a particular type of metabolite called Trimethylamine (TMA) N-oxide or TMAO as a recently discovered independent risk factor for coronary artery disease and strokes. This chemical interacts with the lining of our arteries leading cholesterol plaques. Harmful intestinal bacteria breakdown a chemical called choline that is in egg yolk, liver, beef, and pork. The breakdown metabolite called TMA is converted by the liver into TMAO.

High plasma levels of TMAO correlated with an increased risk of major adverse cardiovascular events that is independent of traditional risk factors like hypercholesterolemia (high cholesterol), smoking and hypertension. The authors of the study recommend limiting the intake of the choline containing foods and adding a beneficial probiotic that will reduce the harmful bacteria that metabolize choline. “This is a very exciting study,” said Dr. Crandall. “It gives us a brand new way of looking at heart disease. It also opens an avenue for new tests and treatments.”

The discovery of the heart disease-causing bacteria might explain why about half of those who die of sudden heart attacks have no known risk factors for heart disease, like high blood pressure, cholesterol or diabetes, he noted.

In another study from the American Heart Association, researchers tracked cholesterol esters bound to saturated fat, which has been linked to dangerous arterial plaque buildup and occurs at higher levels in coronary artery disease in patients.

The study involved 127 adult patients with high cholesterol. About half the participants took a probiotic called Lactobacillus reuteri NCIMB 30242 twice a day while the other half of the group were given placebo capsules. Those taking the probiotic had LDL levels 11.6 percent lower than those on placebo after nine weeks. Furthermore, cholesterol esters were reduced by 6.3 percent and cholesterol ester saturated fatty acids by 8.8 percent, compared with the placebo group.

Scientists have proposed that Lactobacillus bacteria alone may impact cholesterol levels in several ways, including breaking apart molecules known as bile salts which results in lower production of cholesterol by the liver.

If you are struggling with cholesterol-related health problems or are on a weight loss program that isn’t working for you, consider meeting with your medical practitioner and adding a high quality probiotic like EndoMune to lessen risk factors for cardiovascular disease.

Your Gut and Growing Muscles Exercise is one of the best things you can do for your body, whether it’s strength training, swimming, tai chi …